Our journey along the Silk Road started from Milan Lampugnano Bus Station on Wednesday 31st, July at 9:30pm* …well, it should have…indeed, we set off at 10:30pm as some people had issues with their visas! We got on a Flixbus heading to Zagreb (€49.50 each). Despite the stop calling every one or two hours, the journey went smoothly and we managed to get some sleep till the border between Slovenia and Croatia; there, we had to get off the bus for passport control (as Italians, our ID cards were valid for this border and all the following in this section). We arrived at Zagreb at about 9am quite tired and we went straight to the hostel.

We stayed at Zagreb Soul Hostel (98kn each -the exchange rate for us was €1 ~ 7kn). From the bus station you can get tram No. 5 or 7 and get off at Meliceva, the hostel is a few steps forward in a little square on your right. We really liked this hostel because of its position, rooms and common areas!

We booked the bus to Sarajevo online while drinking a beer at Verdi Café. There aren’t many options and Google will show you all the possible ones. We got the night bus that left Zagreb at 10:00pm (€26 each) and arrived at Sarajevo at 6:00am.

Due to a heavy storm we decided to wait at the bus station and to book the bus to Belgrade (we wished we could go to Sofia but there were no options!). Then, we took a taxi to go to the city centre (6,30 KM – the exchange for us was €1 ~ 2 KM) but we suggest you to catch tram 1 in front of the train station, next to the bus station (you need to be lucky, though, as apparently there is only one round-trip tram!) or tram 3 on the main road, five mins walking from the stations walking along the street where the sober American embassy is (ask and people will point it for you). A tram ticket costs 1,80 KM on board, 1,60 KM at the tabacchi.

We stayed at Residence Hostel right in the city centre next to the cathedral (30 KM each per night). It is super clean and nice, the kitchen and the common areas are home-like! The lady who owns it is very welcoming and helpful. We were lucky as our room was empty so we could go to sleep all morning!

Mostar is highly recommended as a day trip from Sarajevo. How to get there? So, you have two choices:

We caught the tram 3 at 6:30 behind the cathedral and then the train; whereas to come back we caught the bus at 3pm. The view from the train is amazing, but also from the bus is very special!

As said, going to Belgrade was not part of our plan as we wanted to go straight from Sarajevo to Sofia… but apparently there is no way to do it. So, we stopped over in Belgrade. The bus left Sarajevo at 6am and got to Belgrade at 2.30pm; the landscape is very nice, particularly in Bosnia!

Once in Belgrade we booked the first bus to Sofia, which was at night, so we then went to eat and to visit a bit the city.

So.. there is no direct bus from Belgrade to Sofia but there is a planned connection and tickets are sold together at the bus station, desk No. 13. The bus leaves from Belgrade at 00:45 am (2,590.00 dinar – for us the exchange was €1 ~ 117 dinar) and it arrives to Niš at about 4am, the another bus leaves from Niš at 4:30 am and gets to Sofia at 10:30 am, local time (more details about our fun trip in the dedicated article!).

In Sofia you can easily move by public transport and a ticket costs 1.60 lev (the exchange for us was €1 ~ 2 lev). We took the metro from the train station to the city centre, two stops, in order to get to our hostel. It was H2O hostel (€10 each) and we liked it as very convenient for price and location; the common area was also very nice but the kitchen was dirty.

We used the public transport also to go to the Boyana Church on a hill out of the city centre. We caught the city bus No. 9 and No. 46 – you can use Google maps or map.me to check it out.

As soon as we got to the bus station in Sofia we walked to the train station to buy a ticket to Istanbul. You can also go by bus (45 lev each) but the trip is quite long and we preferred an overnight train with couchette (55 lev each). Booking one day before the trip has its pros and cons: pros, we were just 3 people in a couchette for 6; cons, we were located on the old DDR train and not on the new Turkish one!! Well.. we haven’t actually considered it a cons as we enjoyed the experience and our nice couchette mate was a German man who grew up in West Germany ..and we were on a East-Germany train.. we found it funny 😆

By the way, the train left Sofia at 9:45pm and got to Istanbul at 9ish am. We slept very well even if we had a break between about 3 am and 5 am due to passport controls. At the Bulgarian border, passports are collected by police officers whereas at the Turkish one all the people on the train need to get off and queue for control.

Surprisingly, a private transfer was organised for all the passengers from Halkali station to Istanbul city centre. However, you can catch the metro and then the tram if needed. More details about Istanbul and it’s transport system in the Turkey section.

So, our journey across the Balkans lasted 8 days and we crossed 6 borders, from Milan to Istanbul. We exchanged 4 currencies and we spent more or less the equivalent of €350 each.

*all the timetable are in local time according to the country

From Moscow to Milan by Train: Everything You Need to Know 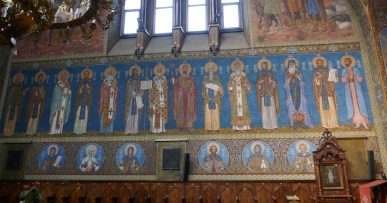