Little is known of the early history of Kars and the only reliable source of information are dated around the Medieval Age. Around the 9th century the city came under the Armenian control and it became the capital of the Bagratid kingdom until the 961. Two years later, the capital was transferred to Ani and Kars became the capital of another independent kingdom. Several invaders then contested, conquered, and dominated the area of Kars. The most important were the Byzantines (1045), the Seljuks (1065), the Georgians (1206), the Mongols (1242), the Timurids (1387) the Ottomans (1585) and, finally, the Russians (1828). After World War I, Kars came under Armenian control but, in summer 1920, Turkish troops invaded the Armenian republic, triggering the Turkish-Armenian war, and Kars fell under Turkish control. After the Soviet invasion of Armenia, the Soviet Union and Turkey signed the “Treaty of Kars” (23/10/1923) which allowed the Soviet annexation of Adjara in exchange for Turkish control of the area of Kars, Igdir, and Ardahan. Following World War II, the Soviet Union tried to annul the treaty but Turkey resisted supported by the UK and the US. In April 1993, Turkey closed its border with Armenia in a protest against the Armenian capture of Kelbajar district of Azerbaijan. Since then, the border has remained closed and there are still a lot of friction and different visions of history between the two countries.

When we arrived at Kars, our couchsurfing host came to pick us up and we immediately realised that communicating with him would have been difficult. Indeed, despite being a fantastic and generous guy, Furkan couldn’t speak a single world of English and without google translate, gestures and a lot of imagination we wouldn’t have been able to communicate. He immediately brought us to a bar where he normally plays cards or a game called okay (or at least that’s what we understood) similar to domino. There, we met some of Furkan’s friends, all policemen, among which Ehran, who was also his neighbor we later found out. In the smokey and exclusively male environment of the bar, we spent an hour or so drinking tea and trying to understand, unsuccessfully, the rules of the game “okay”.

After, Ehran brought us home and to eat a kebab. Our Turkish friends then insisted to drink another tea so, thinking that refusing would have been impolite, we agreed and ended up in a bar in Ataturk Caddesi; it’s probably famous to be the bar of the police, since we met half of the department there drinking çai. In the occasion, we also found out that Ehran was working that night (the criminal rate is probably not very high in Kars) and we realised why he had a gun in the back of his trousers (we had noticed that previously and the reaction was a bit like wtf!). In addition, the owner of the bar, extremely friendly guy, told us that there was a bus to Ani ruins at 9am the next morning so, after another couple of teas (probably the 10th of the day), we headed home and we went straight to bed.

Furkan had decided to join us but that morning we realised he doesn’t like to wake up early. He took ages to get up, he wanted to have breakfast at home and then we had to rush to drink our tea. After a second-degree burn to our oesofagus we went out and we somehow managed to get the bus to Ani where we arrived around midday. Ani ruins are very fascinating and the visit of the site is worthy, despite most of the churches are internally damaged by idiots who decided that scratching out the frescoes or write their names was the right thing to do. We were back in Kars around 4pm and we went for lunch with also a girl we met on the bus, called Eveline, who would join our trip over the next three days.

After lunch, Furkan and Ehran went to Georgia to buy alcohol and cigarettes (where allegedly is much cheaper than in Turkey) while the two of us and Eveline decided to remain in Kars, politely declining Furkan’s offer to join them. We spent the afternoon wandering around the city and then we stopped at Eveline’s hotel where we met Yang, a Taiwanese guy that was on the bus to Ani with us. The four of us then went to visit the castle of Kars and the Kars cathedral, where a bunch of angry Armenians wanted to clarify that that was their church! Indeed, it was converted into a mosque and then again in a church and now it’s a museum.

At 6pm, as previously agreed, we went to the bar of the previous night where we were meant to meet Furkan. After one hour and a half, three teas and few unresponsive messages, Furkan appeared and invited all of us at their place for dinner. That night we cooked Italian pasta, we drank whisky, we laughed a lot and we played traditional music from our home countries…fantastic last night in Kars! We went to bed around midnight, the day after we had to wake up early, we would meet Eveline and Yang around 8:30 at the bus station. They decided to come with us to Georgia, let’s see how it goes… 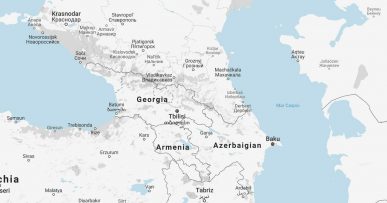 Our journey in Azerbaijan